The Axcess™ delivery system significantly increases the absorption of peptides, proteins and other macromolecules across the intestinal wall when delivered orally without any chemical modification of the active compounds.

The Axcess™ delivery system is based on a simple mixture of components consisting entirely of registered pharmacopoeial or GRAS excipients with a long history of pharmaceutical use. The absorption enhancing activities obtained from the formulation of these excipients is entirely novel and is covered by five international patent families.

Core patents have been granted in major territories including the US, Europe, Japan, Korea, China, India, Russia, among others.

Diabetology has licensed the exclusive rights to Axcess™ for the formulation of its specific development and out-licensing programs.

Additionally, the Axcess™ delivery system may allow Diabetology to further expand its pipeline in the future with the development of new oral therapies for diabetes.

How Does it Work? 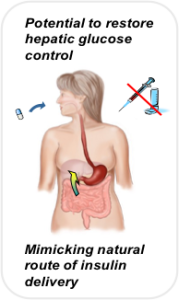 WE CAN ORALLY DELIVER YOUR MACROMOLECULES